A Night to Remember

The Alfred Erlandsen met its end, unseen in the Dense Fog 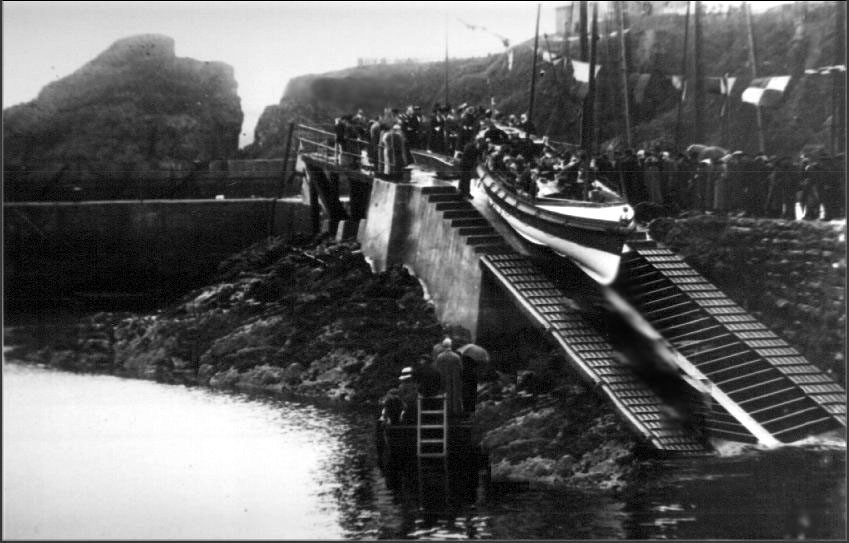 Extract from a Book 1910, Title and Autrhor Unknown

Seven year old George Colven huddled closer to the fire in his grandparents' cottage at St. Abbs. Wisps of smoke from the dying embers made their way reluctantly up the chimney to add to the murkiness of the dense October fog " it's a bad night for the men at sea," muttered George's grandfather as much to himself as to the St. Abbs youngster sitting on the floor at his feet. His words were chillingly fortuitous. Only a few hundred yards away, 15 men were about to lose their lives.

The steamer Alfred Erlandsen, bound for Grangemouth from Libau, in Denmark, ploughed on to the treacherous Ebbs Carr rocks, with a sickening crunch of steel. Her deck cargo of pit props broke loose with the force of the collision, sending them hurtling into the water.

The piercing scream of the ship's steam whistle stabbed through the fog, bringing the fisherfolk of St. Abbs hurrying from their homes, snatching up oilskins as they went. George's grandfather clung firmly to the lad's hand as they ran the short distance from the house to the Round Hill, atop the cliffs facing the North Sea. Above the anxious, excited chatter and the booming of the surf, rose a cry for help. Then another and another. Nothing could be seen through the blanket of fog. "It's hopeless," said young George's grandfather. "They haven't a chance."

Throughout that night, Thursday, 17th October 1907, the villagers remained on the clifftops, only too aware there was nothing they could do to help the unfortunate crew. Many a silent prayer was offered for the unknown sailors hidden by the fog and darkness. The ship's siren blared unceasingly, either tied down or grasped by some brave soul in the desperate hope it would somehow be their salvation. It stopped for good as suddenly as it had begun when water flooded the ship's furnaces.

The silence made the heart rending screams even more pronounced. George Colven shivered with cold and fear. The passing of almost 80 years hasn't erased the awful memories of that night as I soon learned when I spoke to George recently on the same clifftop at St. Abbs.

George, who was a seaman for 60 years, and harbourmaster at the Berwickshire port for the past 24, recalled the events of that night and the following days with a clarity and detail which belies his 85 years. He told of the desperate rescue attempt, which was put into motion as soon as the Alfred Erlandsen hit the rocks. In the first decade of the 20th century, St. Abbs did not boast a lifeboat, or even the most basic of rocket-firing apparatus. The nearest lifeboat was five miles south at Eyemouth, and as soon as the ship ran aground, the alarm was raised there by telephone and also at Skateraw, Dunbar, 15 miles to the north.

Life-saving apparatus was soon on its way from Eyemouth. A team of farm horses, straining to pull the heavy four-wheeled wagon, was urged along the coast road to St. Abbs. But the valiant effort by man and beast was all in vain. By the time the lathered animals reached the clifftop, there was no sound from the wreck. Rocket after rocket was launched through the night in the desperate hope that one would reach the stricken vessel, but they fell short of the Ebbs Carr, just 400 yards away. Even had they reached, the result would have been the same, no man on that stricken vessel had survived to fix the lines.

Carro the Great Dane (the only survivor)

As a direct result of the Alfred Erlandsen disaster, a lifeboat station was established at St. Abbs. On 25th April 1911, the Helen Smitten was launched, funded mainly by the Usher brewery family who lived in the village's Northfield House.

A Wolseley car engine had been adapted and fitted into the lifeboat, and this greatly reduced the time it took to reach vessels in distress.

The night the Alfred Erlandsen and her crew perished is still vivid in George Colven's memory. "I've often thought about it and it's my personal opinion that the master of the ship, Julius Larsen, was not to blame on account of bad navigation. "A few hundred yards more sea- room would have kept the ship on a safe course, but there was an easterly storm, dense fog and a very heavy sea. Also, she had no wireless or navigation aids."

In 1982, a family visited St. Abbs from Denmark. The husband introduced himself to George as Jakob Larsen, the son of the Alfred Erlandsen's master. He had brought his family on a pilgrimage to the village to see the reef where his father had lost his life.

"I told them the story, just as I'm telling it to you. They were all deeply moved." The Larsens still keep in touch with George and one of his proudest possessions is a ribboned medal Jakob sent to him. It is inscribed simply, "In Memory, October 17 1907 ". 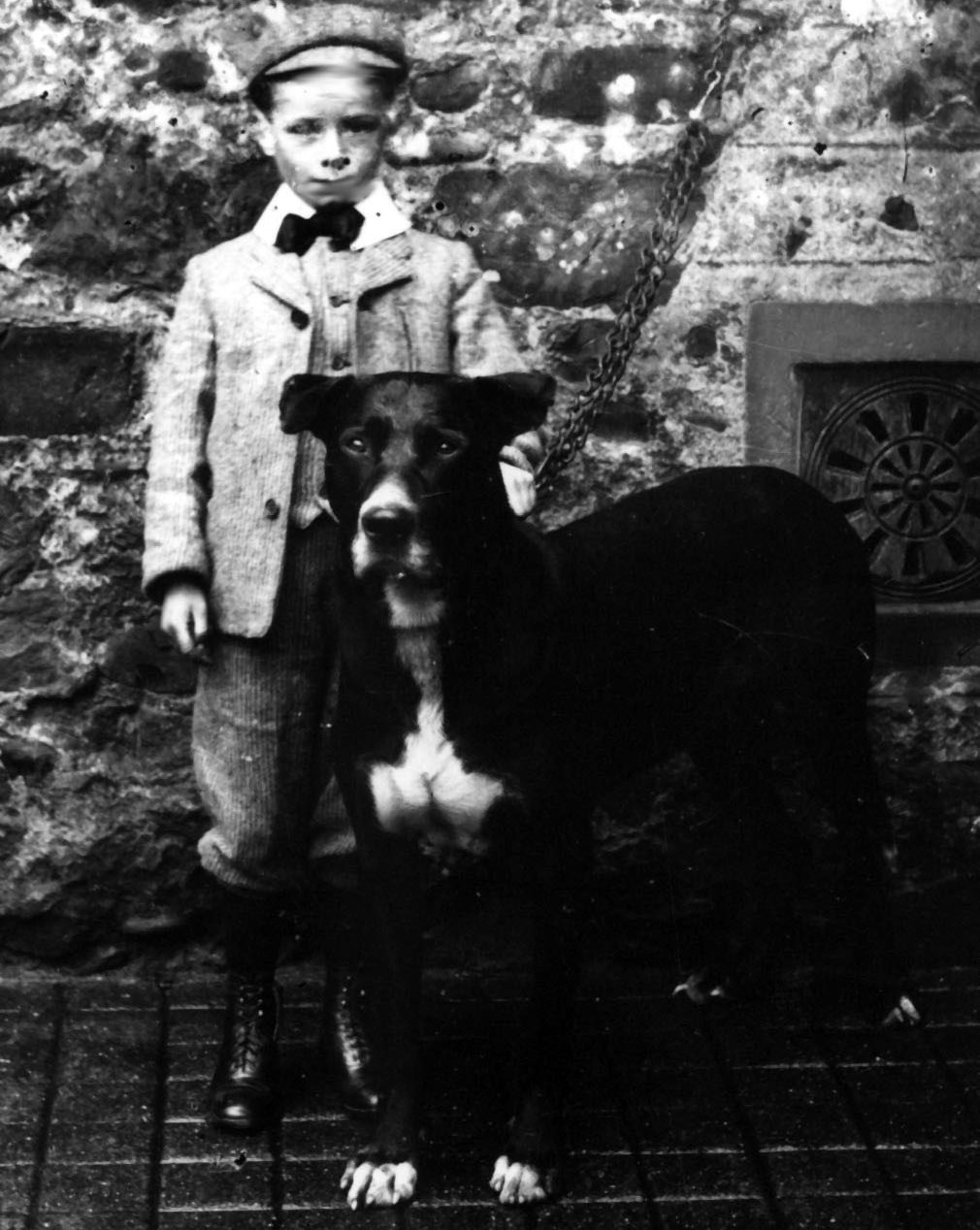 As a result of the 1907 tragedy, St Abbs was allocated a lifeboat. Here the Helen Smitton is being launched on 25th April, 1911. She was to serve the Berwickshire coast for 25 years.

Plaque which was placed in St Abbs Church 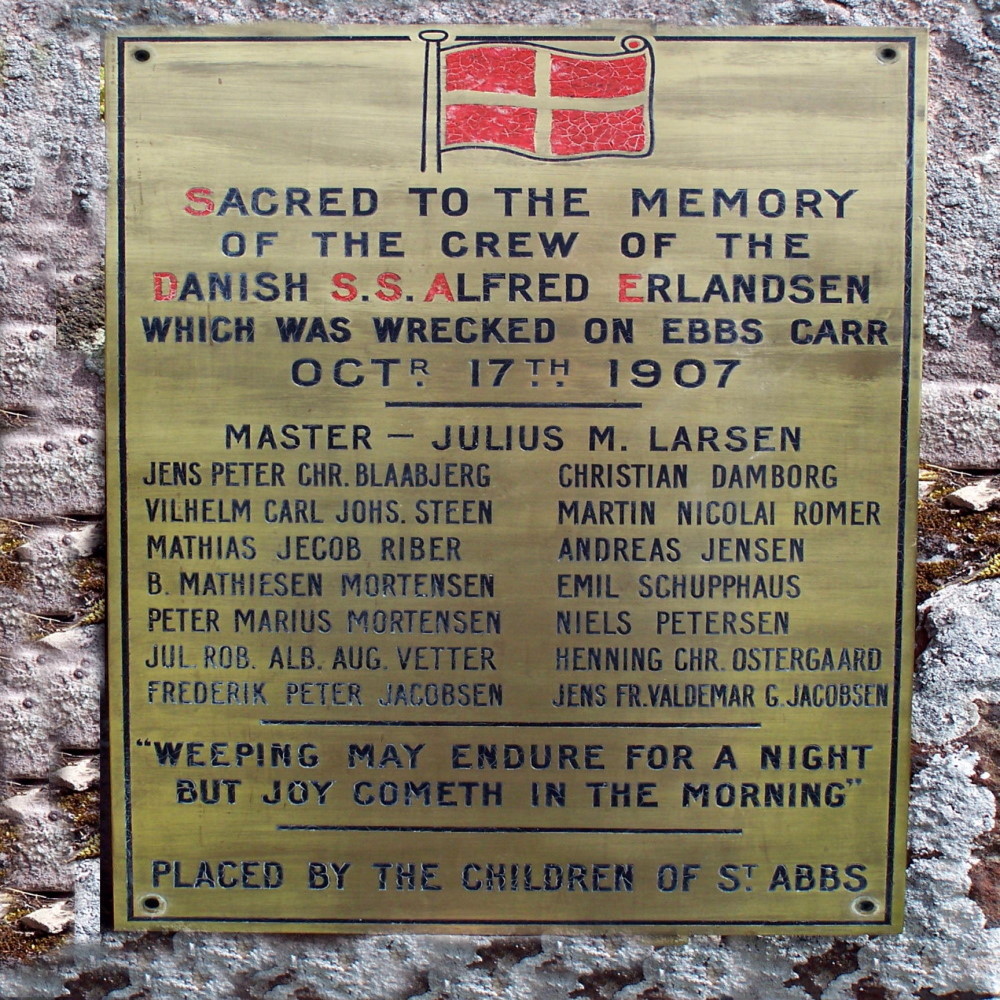